So last weekend we had a wonderful photo shoot for the gradient book – I think it’s going to be called ‘Knitting with Rainbows’. Very fittingly we found some fantastic graffiti downtown in Cork that makes the perfect backdrop for the book. We also found this spot behind the disused Beamish & Crawford brewery. It was across the river so we couldn’t reach it, but so beautiful!

I’ve been working like a crazy person for the last few weeks putting tutorials together and reviewing pattern edits. In my head up to this point I keep saying ‘it’s just going to be a small book‘, just a few patterns and tutorials. Well apparently I can’t do anything small! I’ve got 11 patterns, additional stitch patterns and tutorials and at the very minimum I think this book will be around 80 pages long. It would explain why feeling somewhat overwhelmed, a little bit panicked and exhaused. I haven’t acknowledged what a substantial project I was taking on. It is however going to be an information packed and very pretty book. My son’s girlfriend is a very talented illustrator and next week she is getting started on book illustrations and I can’t wait to see them. I’ll share some with you as she works along.

Just to give you a flavour of the book, 2 patterns have already been produced and are out in the world. The first is Probys Armwarmers which was the last pattern from the Irish Yarn Club 2016. (All patterns are also on ravlery now from that club). This pattern is a great example of how a slip stitch pattern can be used to blend a gradient kit that has big jumps between the colours.

The first version was in Townhouse Yarns: 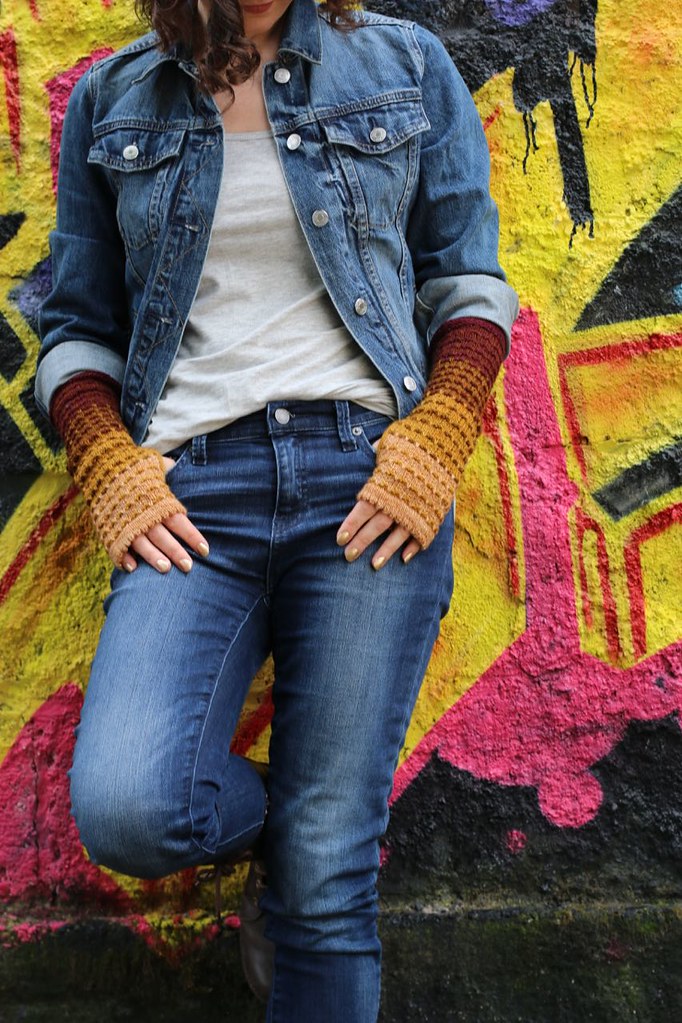 I’ve also had a sample made using a second yarn to give an idea of what another set of colours would look like.
The second version uses Fyberspates yarn:

The second pattern that you’ve seen before is Stave Hat. I’ve previously published the child’s sweater version of this chart and the hat has been used in my Textured Colourwork classes. This hat uses textured colourwork (purls worked into a stranded pattern) to blend the colours together. It works really well for either a gradient set that has big colour jumps or for a collection of colours you have put together yourself that you want to blend smoothly.

(Yes, that really is a giant cockerel mural behind her….)

So if we keep working at this pace I think the book will be ready to go by the autumn. I hope you’re all getting as excited about this as I am – it’s getting real now :-)

3 thoughts on “Working on those gradients”

This site uses Akismet to reduce spam. Learn how your comment data is processed.