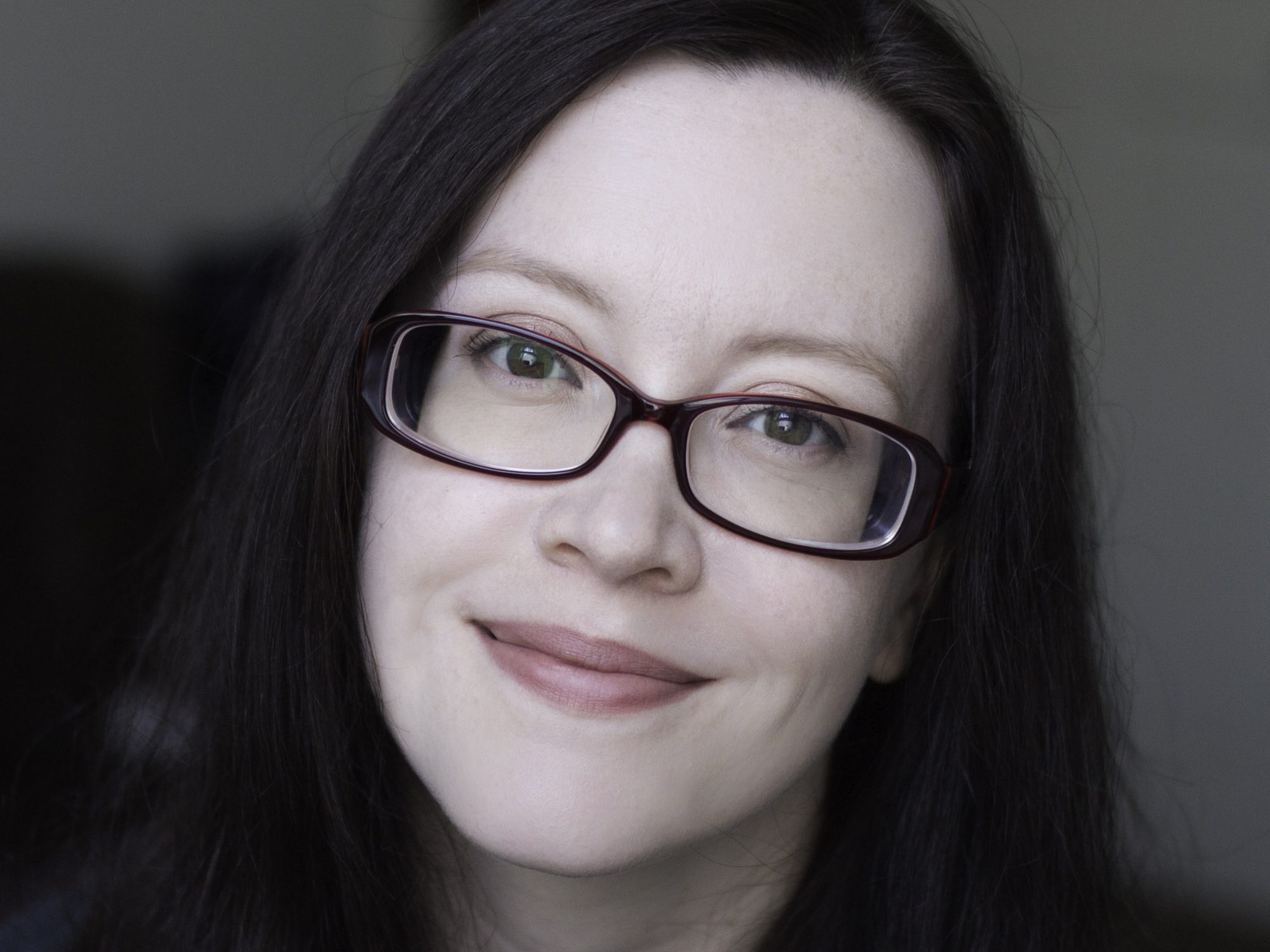 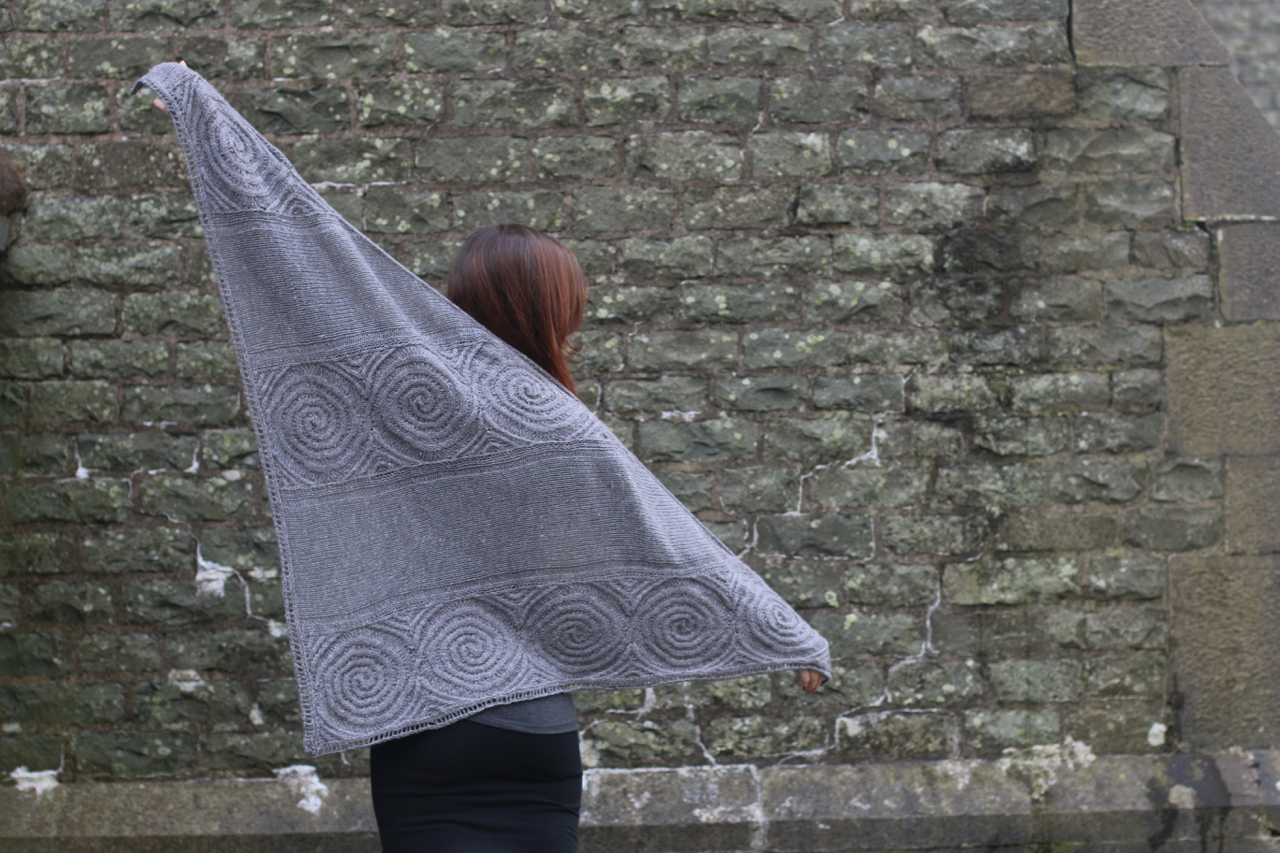 “Perhaps this inner spiral was intended to pacify the spirit of the deceased, to guide it out of this world. Or perhaps it held a secret of a sort the living soul should know. This spiral on stone C10 is a basic maze, called monocursal, meaning there is one pathway running throughout, with no dead ends. But there are three forks in the path, and two distinct circuits. There is one entrance that is also the exit. […] It is possible to skirt around the outside and return to the exit without having traversed the inner circuit. […] If we read this as a metaphor for human life, such a route would miss the core experience, and leave the unwary traveller none the wiser.”

When I was asked by Carol to contribute a design to Echoes of Heather and Stone, I decided to take the opportunity to experiment with something a little different to my usual Celtic and Pictish designs, and so chose to attempt my own recreation of the spiral and lozenge motifs that decorate the kerbstones at Newgrange. Whilst I very much enjoy bending cables to my will and getting them to flow in all sorts of crazy directions across a section of flat knitting, I’ve recently become more interested in the possibilities provided by utilising the underlying geometry of the knitted fabric itself – for example, the centre-out and centre-in squares of my Durrow shawl (which make complex square Celtic knots possible, complete with some sections of cables that appear to flow horizontally, and with knot-work that flows seamlessly across the border), and the modular hexagons of my Pleione blanket  and cowl, which are worked separately and create a tessellating effect when joined together. Modular knitting is a lot of fun to design, particularly if you try to make the whole piece knitted, without any seaming – it’s rather like assembling a puzzle, and there are often multiple solutions to the same problem (some more elegant than others).
I initially tried to create the spirals for this shawl by working centre-out circles, with cables travelling at staggered intervals across the fabric. Interestingly, this worked very well to make logarithmic-type spirals but I soon realised that this couldn’t possibly work to make the Neolithic-type double-spirals, where the gap between the spiral bands remains constant (like a path in a maze) rather than increasing as you move away from the centre. The logarithmic-type spiral is closer to the curves found in Celtic art – so that may be something I could incorporate into a design in the future. After learning how to draw the spirals seen in Neolithic art, and examining them closely, I realised that the best way to recreate them in knitting would be through the use of short row circles. The underlying geometry of the knitted fabric works very well with the cables, resulting in something that looks quite complex but is actually relatively straightforward to achieve. The trickier part was to figure out how to fill in the sections between the spirals, to create shapes that fit with the Neolithic inspiration and which would also result in straight edges to form the panels of the shawl. After much trial and error, I managed to chart something that worked nicely.
Incidentally, one of my initial ideas for this shawl was to have the whole thing made out of these cabled strips, without any plain knitted panels in-between the cabled sections. This would create an interesting all-over effect, and I think the shapes between the spirals would join up to create rectilinear diamond shapes very similar to those seen on the Newgrange entrance stone. I think this would be an interesting experiment, perhaps to make a blanket. In the end, I decided to go with plain knitted panels in-between, partly to lessen the weight of the shawl (and the amount of yarn used), partly for aesthetic reasons, and partly to introduce a bit of ‘mindless’ knitting into this shawl. I find the most fun knitting projects (for me!) are the ones that strike a balance between complexity and simplicity, so I tried to include a bit of both in this pattern.
I hope that those of you who decide to have a go at this shawl enjoy making it! If you would like to learn more about Neolithic art, the website Megalithic Portal is a great resource and can help you to find local monuments and places of interest in your area.
******************************
Thank you so much, Lucy, for introducing us to the background of your beautiful shawl. If you would like to hear more from Lucy you can find her over on her website www.lucyhague.co.uk and on Instagram and Twitter and you can find more of her beautiful designs on Ravelry here.
There will be more upcoming releases from Echoes of Heather and Stone coming soon and if you want to be one of the first to hear about the books release dates and launch party then sign up to the Stolen Stitches newsletter here. The book is now available for presale here and you can read all the blog posts relating to the book here.
I’m getting very excited, are you?

6 thoughts on “Lucy Hague on her Design Inspiration Behind her Newgrange Shawl.”