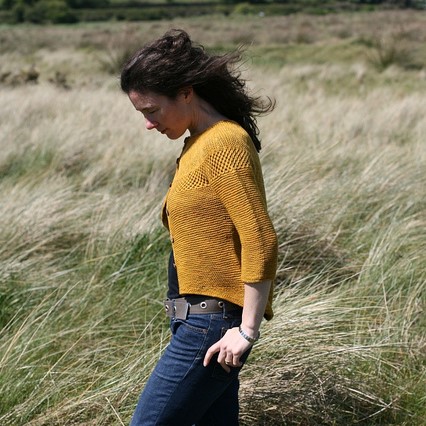 Last week I opened a thread on Ravelry and asked on social media if you had any questions that you would like to ask Carol. Today’s blog post has the answers that you seek; from design questions to how she likes to unwind to her favourite pattern. Read on and enjoy:

If Carol had to go to a desert island and take only one pattern of hers to make which one would it be!?

I’m very bad at redoing things, in fact I almost never re-knit patterns that I’ve done. If I had to pick a favourite pattern, it would probably be Ravi BUT if I was actually on a desert island I’d think just keep knitting new stuff and designing even if it was just for me!

How has your travels/being an expat in the past influenced your knitting?

I’ve spent most of my life in Ireland and only lived for a few years in Florida. However I think having an American husband in Ireland gives me a slightly outsider view.

Growing up in Ireland I never really appreciated all things Irish. In fact at 16-18 all I wanted to do was leave! Originally I wanted to go to Australia. I met my husband at 19 and we got married and went to Florida a few years later. There’s nothing like living outside your country to help you appreciate its uniqueness. It began to dawn on me how special it actually is to be Irish with such a strong culture and traditions. When our first-born was 16 months we moved back to Ireland and it felt really good to be back here. I don’t think I’d have ever appreciated it I hadn’t left for a few years.

In terms of influencing my knitting – I don’t really know? I think it probably makes me more open to multiple influences, drawing inspiration from everywhere. Also the global internet community does that also as much as travel.

How did Carol make the transition from designer on the side to full-time notable designer extraordinaire?

Accidentally! I’m not good at standing still; I don’t like managing businesses just growing them. This means that my head is already planning the next project before I’m even finished the one I’m working on.

When I started I was so obsessed with just designing that I didn’t really worry about how I was viewed. I can only impact what I produce; creating the best knitting and patterns I’m capable of at that time. Whether people like my work and patterns or hate them is something I have no control over. I focus on what I can control; the patterns and giving the best customer support I’m able to. I want to open possibilities up for people. We spend so much time knocking ourselves down that I want to focus on building and believing and having fun! Designer and knitters can often be their own worst critics, often shutting themselves down before they even start – just stop! Focus on what you do well and figure out what you need to do to improve. There’s enough people in the world who’ll knock you so don’t do it to yourself as well!

Which yarn is your favourite to work with and why?

I don’t have a favourite yarn but I do like most natural fibres.

I like wool and merino, with a preference for non-superwash. In summer I love linen for it’s drape quality. My favourite yarn weight would be sports weight as it’s light enough for shawls and accessories but still knits up quickly enough for a good weight garment.

What pattern are you most proud of?

When I can solve a design problem, a pattern makes me happy. The first time I had to work over and over on a yoke and eventually got it just right was Killybegs. So this will probably sit in my memory as a special one. The way the decreases work into the cabled yoke for this still makes me happy :-)

What is your favourite part of your job?

Variety! I’d never be happy doing a job where it was the same thing every day. I love that I can jump from spreadsheet work, to blog post writing to sketching and knitting. And as an added bonus I get to travel and teach! I find teaching very hard work and exhausting but the feedback and understanding I get from classes that can be built into my patterns is fantastic.

How did you decide to become a knitwear designer?

I never really decided, it happened by accident. After the birth of my fourth son I had sold a business and was going to be a full-time mother. I get bored (even with the insanity of a baby) easily and wanted to try something new so I started knitting again thanks to This Is Knit in Dublin. I couldn’t stop knitting obsessively and that very quickly lead to designing. It made me so happy to design and write patterns that it wasn’t a choice at that point, I was just miserable when I wasn’t knitting.

In fact, it even made me step away from a PhD that I was thinking of starting! I was back in college doing tutorials with civil engineering students and had plans to do a PhD in a combination of engineering and architecture. After a few months teaching I resented every night I had to prepare practice questions for the students instead of knitting. This meant that I went in to my supervisor to tell him that I wasn’t going to pursue it as I was going to do knitting instead. His expression at that moment was priceless!!

Where do you draw your inspiration from?

Everything! Usually it’s something I want to wear that I can’t find. I’ll get a picture of a knit I want and then I’ll create it. Other times I get a new yarn and experimenting with stitch dictionaries and you’ll start to see how it works best. Every yarn has different strong and weak points but you don’t discover them until you kit with it.

Autumn is my favourite time of year in shops; I’ll just wander getting a feel for current colour trends, shapes, and what kind styles are popular this year. While I knit all kinds of items, cardigans and sweaters are always my favourite.

If you could work in any other occupation what would it be and why?

I occasionally get an engineering pang when I pass a building site. I liked being out on site. However the thought of retraining and not knitting holds no appeal!

I’m not a huge ice-cream fan and can only eat it in small amounts. I do however still dream about a homemade ice-cream that we found in Sarasota, Florida when I was pregnant. It was a dark chocolate peanut butter mix from an Italian store that was just amazing!

I don’t listen to a lot of music, except in the car, as I can’t work with music on. That’s not popular when you’re in a bigger office! I tend to be fairly old school and like some of the classics, Joni Mitchell and Cat Stevens always make me happy with a bit of Violent Femmes, Florence and The Machine and Taj Mahal on the side. (Perhaps a little of the White Stripes for good measure).

How does she unwind?

Knitting and a glass of wine – ideally under a warm blanket in front of the fire with my puppy curled up next to me. Perfection!

I hope you enjoyed getting to know Carol a little better. If you want to join in the conversation you can find Carol on Twitter, Facebook and Instagram. At the moment the biggest conversations are on Ravelry in the Luwan KAL group and the Wrap Up Winter KAL thread. You can of course leave questions or your thoughts on today’s blog post in the comments below.