Like much of Ireland we’ve been hit by an unusually cold November.Â  It’s strange to look outside for 3 days in a row and just see snow sitting there.Â  The cold weather by itselfÂ  is kind of fun (in a shivery, slippy sort of way) but the whole house has been hit by some sort of bug over the last week or so.Â  It started with the youngest and then just kept on moving up the line.Â  While I didn’t get it too badly my chest doesn’t seem to have quite shaken the last of it.

Thanks to days of less than stellar brainpower coupled with lots of time sitting nursing sad little boys I’ve managed to finish a Christmas cardigan early for my youngest.Â  Now admittedly as he has tried it on (and tried to replace his school jumper with it this morning!) I don’t think it will be waiting for Christmas. 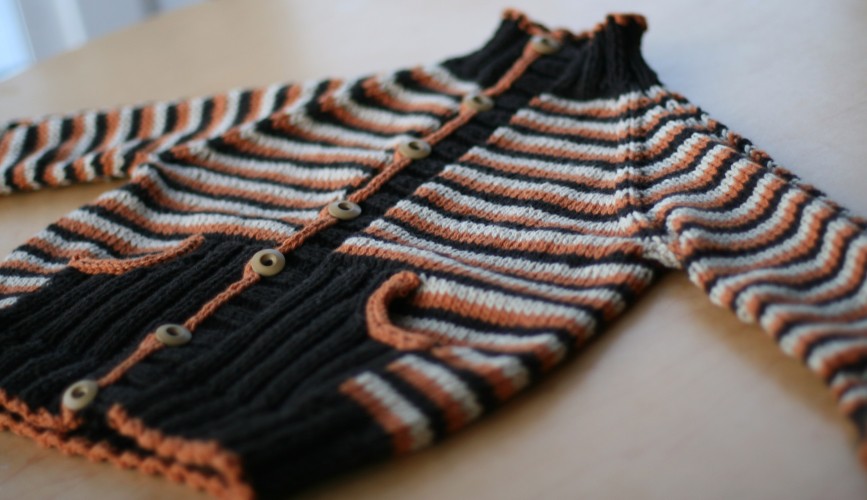 I used Spud and Chloe Sweater (a request from Lucas …I had one hank in the cupboard and he insisted that it had to be in that yarn!)Â  It really is great yarn for kid’s machine washable and dryable with fun colors.Â  In fact between the multiple colors and chunky solid texture of the yarn I felt like I was knitting with crayola crayons (in a good way!)

It was a simple knit but with lots of fun knitterly details … knitted in pockets with I-cord border to match the I-cord buttonholes.Â  Knit from the bottom up in one piece the stripes were close enough together that you can comfortably run the other colors up the side of the work without needing to cut the yarn (which would be such an insane amount of work!).Â  Even though Lucas is coming up to 5 he is a very good size so I knit the 6 year old size for him to give him room to grow.Â  by keeping the cuffs and waistband nice and snug everything stays in place and it looks the perfect size for him.Â  (If it’s not snowing this evening I’ll go and get some modeled shots on him).

Now I just need to stop procrastinating , get my brain in gear and finish off the pattern.Â  Speaking of which, I really will release my small backlog of patterns in the next week.Â  If DH has recovered from his man cold we may see Baby Iced by the end of the week!

(I love the name Spud Murphy for this cardigan, that is what my dad called my brother when he was small!)