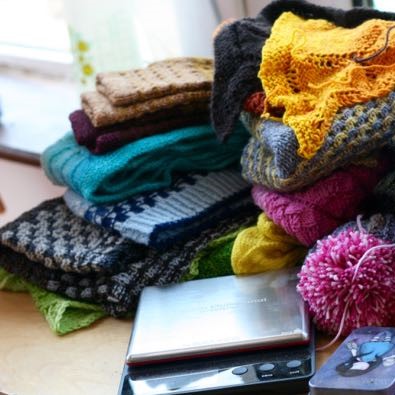 So it would appear I’ve got a lot going on. Between family commitments, travel (both me and my husband), teaching, book, magazine and yarn company projects I’m stretched pretty thin.

However, I do appear to be just about holding it together. Certain things (such as regular housework!) aren’t always getting done but I’m staying on top of everything.

The only reason I’m actually still sane is lists and reminders. Every day I write and rewrite lists. I break projects into short lists and cross them off as I go. At the end of the day all unfinished business gets scooped up and rewritten into the next day’s list. That’s the theory at least. Some weeks my head is much more in the game and I go charging through lists, other weeks the list looks the same at the end as it did at the start.

Combining that with calendar/reminder apps means that I don’t forget stuff. If I get a text from school that someone is finished early – pop it into the calendar with a reminder far enough in advance that I can deal with it. Putting all these little things in as automatic reminders has saved me so much mental space. It’s such a relief to not have the worry of forgetting about something hanging over me!

My lists extend into projects as well – my Gradient book list is getting shorter by the minute… just take a look at my growing pile of finished samples. Just a few more left to go and we’re ready for photography :-)

My biggest job now is expanding on the book text and getting the remainder of the illustrations done. My ‘Painting with Rainbows’ class from the Edinburgh Yarn Festival class has formed the backbone of the book structure. The divisions I’ve used for different types of gradients in the class will form each section of the book with pattern examples of each type. It looks like it’s shaping up to be a really useful, pretty little book!

In other work, I’ve got 2 new published patterns to share with you!

The first is from Pom-Pom magazine, issue 17. I was so proud to be part of this magazine, and very flattered to have my pattern, Nouri, on the front cover. It’s a simple but effective design; the great linen yarn is just perfect to get the drape and heaviness that it needed. Knit in the round from the bottom up there is a large lace detail up one side. At the armholes you divide for the front and back, each side is knit separately and short rows shape the sleeves and shoulders before they’re rejoined. The yarn used is Quince & Co, Kertrel – watch out for a giveaway here for some yarn to make your own Nouri sweater very shortly!

The second pattern I’ve had published recently is Parcel.

This is a pattern that was first published in the Twist Collective in Winter 2010 using Classic Elite Magnolia yarn.
They have reknit it in Black Trillium Fibre studio Sublime for a completely different look that gives it a great update. This yarn really makes the delicate twisting cables in this sweater pop, plus that scooped neckline is so flattering to wear. To get some inspiration on different yarns and shapes in this sweater take a look at some of the projects that knitters have added to ravelry.

Just in case you think that’s not enough check back here on Thursday for some very exciting news I’ve got to share with you :-)