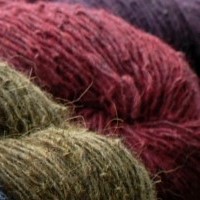 Back in 2010 (although it was released in 2011) I wrote the book, Contemporary Irish Knits, that looked at the Irish mills that spun yarn commercially for hand knitters in Ireland as well as the Irish hand-dyers that were operating here at that time. However no market stands still and the yarn industry in Ireland continues to change and develop. Over the coming months I wanted to do a few interviews with people in the Irish yarn industry to find out what’s going on right now.

A few weeks ago I asked Diarmuid from S Twist Wool if he’s answer some questions on the Irish sheep, spinning and yarn industry. I met Diarmuid at This Is Knit when he was doing a spinning demonstration and his knowledge of the Irish yarn industry from farmer up to the mill is very in-depth. As a spinner he’s got a very unique perspective on the industry that he’s shared with you all here.

Sheep have been with us humans for over 10,000 years. One of the earliest animals to be domesticated, they can now be found on terrains ranging from rocky, Irish mountainsides to Sudanese deserts. Valued for their meat, milk and wool, they have enabled civilisations to develop and cultures to flourish.

According to the ITWO, worldwide sheep population in 2014 totalled aprox. 1.157 billion sheep and clean wool production was around 1,163 million kg. For a long time, most wool went to the clothing industry. These would have been the finer fibres which would have fetched higher prices. However, a few years ago, the scales tipped and now most wool goes to the interior textiles industry, which would use more durable wools. Irish wool for the most part is collected up by the wool merchants and exported for further processing. While exact figures are not available, most of this wool would be Blackface mountain wool. This would mean that the wool would be used for more durable items and would go at a lower market price.

At the same time, Ireland had a sheep population of around 3.6 million spread over 35,000 flocks. The average flock size was 104 sheep, with 69% of flocks having less than this and 42% having less than 50 sheep. Less than 2% of flocks (661) belonged to the largest grouping, over 500 sheep. The following map shows the population density by county.

From these figures we can see that, in general, the Irish flocks will be of a small size and only a very few farmers would dedicate themselves purely with sheep.

This year, farmers were being paid from 0.60 -1.30 per kilo. Shearing costs can be between 2 and 3 Euro per sheep, or even higher depending on flock size, and we would be looking at about 2 – 3 kilo per fleece. Add onto this, costs of transport and any additional labour involved. This means that in most cases, farmers barely break even on selling fleece.

Of course, shearing is just the first step in the process.

These are by far not the only steps, and they may not always be done in this order, but this would be generally how the process goes in large scale industries.

The sheep are brought together and the shearer (or team of shearers) remove the fleece, preferably in one piece. If you ever get the chance to see shearing up close, you really should. Here’s a short clip from showing a tutor from the British Wool Board giving a class to the Irish Sheep Shearers Association in Camolin, Wicklow.

Wool from different parts of the sheep has particular characteristics. For example, wool at the shoulders will be finer than the rest. A skilled sorter will be able to divide a fleece up to 14 different grades.

Sheep’s wool contains dirt and grease. The grease is secreted by the sheep to waterproof its fleece. It is called lanolin and is used in skin-care products. Getting the dirt out of the fleece is relatively easy. Getting the grease out, scouring, requires a large amount of hot water and chemicals to break down the grease. Anywhere from 15 to 35 litres is used to scour one kilo of wool. The sludge from the dirt and the grease from the lanolin can be recovered from the effluent, although only up to about 40% of the lanolin. From an Irish perspective, scouring is probably the most troublesome step of all and we will touch upon this later.

In order to achieve the uniformity that is needed to help the following processes run smoothly, wool of the same characteristics from different batches are blended together.

To get a uniform, final colour, the wools need to have the same tone as a starting point. The wool is put in a bleach solution, ph balanced, rinsed then dried.

Great care is taken to ensure that batches are as uniform and repeatable as possible.

A small amount of lubricating oil is added to the wool and passed through a machine comprised of rotating drumes covered in fine, metal teeth. This serves to seperate, open up and align the fibres.

The fibres are drawn out and spun. 2 or more of these threads may then be spun together to form plied yarns.

After washing and drying to remove the oil added in the last step, the yarn is made into balls, skeins or wound onto cones and is ready to move on to the yarn user.

Currently what does the production process for Irish yarn look like?

At the moment, to the best of my knowledge, those who produce yarns with Irish wool can be loosely put into three categories. On one end of the scale, you have the handspinner who will scour and card by hand and produce small amounts, usually in conjunction with other related business activities such as classes or farm products.

At the other end of the scale, you have the larger scale industrial mills who will spin small amounts of Irish wool and import the rest from New Zealand, Australia or the UK. In the middle you have companies, like S Twist Wool, who work with Irish wool only. One of the things that we all have in common is the fact that we are all hobbled by the lack of scouring facilities in Ireland. When wool is sent abroad to be scoured, it will get mixed together with wool of other origins and when it comes back, it can no longer be sold as Irish wool. This is the case with one mill, who make the effort and care to use Irish wools, but simply cannot label it as Irish. Most Irish mills have the facility to scour small amounts for their own use.

S Twist Wool gets around this by doing its own scouring on-site in Tipperary using an alternative method called suint fermentation. This method uses no energy, no chemicals and a fraction of the water that other methods use. However, I need the wool to be sent abroad to be spun for me.

Is it possible, and how much would it cost approximately to operate that part of the production in Ireland? Would it be a stand-alone industry or something that was part of an existing mill?

By looking at recent trends, both here and abroad, I think that the future of Irish wool will resemble the development of the slow food industry. When a customer walks into a shop, they will have a choice of yarns from different parts of the country with different fleece options available. Of course, while I am focusing on yarn, there are also other products being developed in Ireland from wool. It is being used for a variety of products from Baavet  duvets with wool filling to insulation products for buildings.

The one factor which is essential to having a domestic wool industry that can stand on its own feet is a scouring facility. This is not a novel idea and many people have worked on it over the years. The main challenges are finding a plant of the right size that would serve the demands of the Irish market and the economics of having to compete with massive plants. There is not enough wool on the Island to warrant a large scale plant, but having smaller facilities would make it difficult to compete on an even footing. It will be interesting to see what solutions we will come up with to deal with this problem over the next years.

I know that the bureaucratic barriers in place for small scale scouring are considerable, which is understandable considering the effluent that is produced.

How do Irish farmers view and approach wool production currently?

There is an amazing amount of enthusiasm and willingness on the farmers side to have more done with their wool. I think the main reason for this is that for so long there has been a feeling that the wool is a byproduct of taking care of the sheep and not a product in its own right.

Surprisingly, there can be a massive difference between fleece quality and handling from one year to another in the same flock and this can be due to how the fleece are handled after shearing.

Farming is, of course, a business and while there is little to no financial recompense for better handling of fleece, it is difficult to place the blame on farmers for not treating wool with more respect. As the market changes and farmers can be offered a fair price, this will also change.

What types of wool is currently available and are they suitable for knitting uses?

This is a very interesting question. We have a large range of different fleeces available in this country. This year alone I have worked with Blackface, Galway, Shetland, Welsh and Jacob. I will have a small amount of Blue Faced Leicester which should be available in February.

My best selling yarns, by a long shot, are made from blackface mountain wool. For the Irish knitting market, this would be seen as unsuitable. However, they are popular in foreign markets. Looking at trends in other countries, as people get more interested in local yarns, we should see a move away from the softer, ‘luxury’ fibres and instead of Irish wool, people will be able to experience Irish BFL, Galway, Jacob, Shetland etc.

What needs to happen for farmers to prioritise wool production?

It’s difficult to know where to start with this, it’s an involved question. The short answer would be to make it worth their while.

The long answer involves building up an industry basically from scratch and changing people’s awareness of wool. In a concrete sense, the biggest barrier to developing the Irish wool market is a lack of scouring facilities here. Having these would open many possibilities of increasing the value of fleece instead of it being sent abroad for the lowest price going. This would provide the knock on effects needed to build up the wool industry again.

A big thank you to Diarmuid for sharing his knowledge with us!

2 thoughts on “Interview with S Twist”